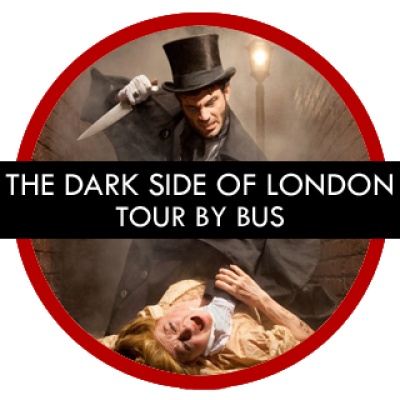 London Gay Tours offer the opportunity to step aboard our vintage open top bus to begin our journey through the dark and haunted streets of London. Hear tales of the legends buried at Westminster Abbey and see the banqueting house where Charles I was beheaded. We then travel to the Old Bailey – the site of numerous public hangings, the Royal London Hospital where the Elephant Man lived, and hear tales of Mrs Lovett’s pie shop with her speciality fillings, the butcherous barber who lived next door and who would cut off more than just your hair.

Stay close to our guide as we walk through a deserted Smithfield market and the surrounding cobbled streets. Then as the shadows lengthen, we approach London’s East End, a hotbed of crime and vice in the 19th century. During the autumn of 1888, terror struck when Jack the Ripper came out of the fog and dimly lit alleys just long enough to stalk and butcher his five victims. At this point we leave the safety of the bus and walk his death trail inspecting the murder sites, deciphering the evidence and discussing his suspects. To this day the case remains unsolved.

Then join us in the warmth of the Sherlock Holmes Pub. The pub also boasts a wide collection of the investigators memorabilia. Feeling hungry? The pub also has a wide variety of meals including a traditional fish and chip supper on offer which can be purchased from the bar. The tour ends at the Sherlock Holmes pub which is situated close to Trafalgar Square.

Let us know when you want to join the tour and we will tell you the nearest availability.

Upper-deck on the bus

Fill in this form with your prefered date for the tour. We can not guarantee this availability but we will do as much as we can to achieve it.