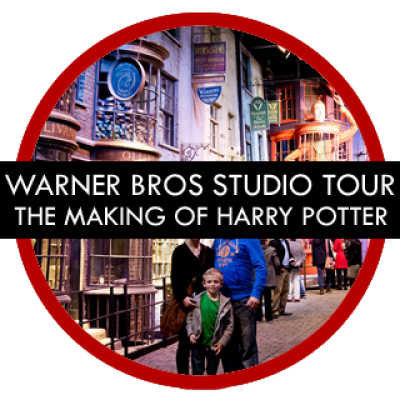 London Gay Tours offers this tour to any Harry Potter’s fan. Step inside and discover the great hall, before listening to previously unheard anecdotes. Explore Dumbledore’s office and discover never-before-seen treasures. Step onto the famous cobbles of Diagon Alley, featuring the shop fronts of Ollivanders wand shop, Flourish and Blotts, the Weasleys’ Wizard Wheezes, Gringotts Wizarding Bank and Eeylops Owl Emporium. See iconic props from the films, including Harry’s Nimbus 2000 and Hagrid’s motorcycle. Rediscover other memorable sets from the film series, including the Gryffindor common room, the boys’ dormitory, Hagrid’s hut, Potion’s classroom and Professor Umbridge’s office at the Ministry of Magic.

Warner Bros. Studio Tour London – The Making of Harry Potter provides an amazing new opportunity to explore the magic of the Harry Potter™ films – the most successful film series of all time. Enjoy previously unheard anecdotes from the expert guides before taking a unique walking tour that takes you behind-the-scenes and showcases a huge array of beautiful sets, costumes and props. It also reveals some closely guarded secrets, including facts about the special effects and animatronics that made these films so hugely popular all over the world.

Fill in this form with your prefered date for the tour. We can not guarantee this availability but we will do as much as we can to achieve it.